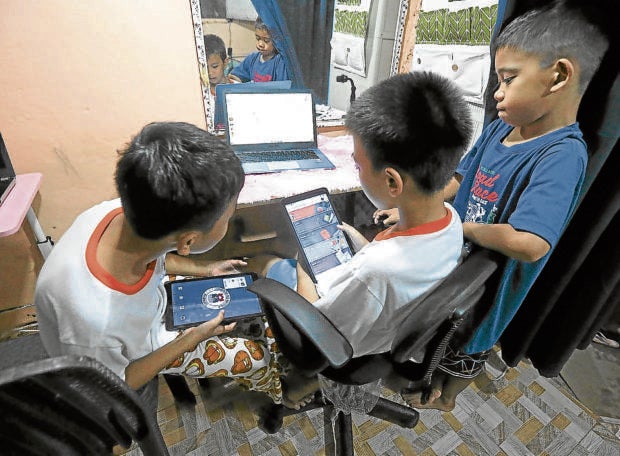 GOING HIGH-TECH Grade 5 students Jelbert Ablin and John Lester Manalo struggle to log in to their virtual class from their home in Tondo, Manila. —MARIANNE BERMUDEZ

MANILA, Philippines — The Alliance of Concerned Teachers (ACT) on Sunday urged the Department of Education (DepEd) to immediately provide gadgets and internet support worth P42 billion to indigent learners.

The amount, which will support 20 percent of the poorest students, will cover gadgets worth P6,000 per unit and a monthly internet allowance of P150 per learner.

Based on the latest enrollment data, the number of students enrolled for the current school year is at 28.2 million, or 107.6 percent compared to last year’s record.

The increase in the number of enrollees despite the pandemic and challenges of distance learning shows the youth’s eagerness to learn and go back to school, ACT said.

“The government should fulfill its responsibility to support our learners and ensure that no one gets left behind. They have already failed to support millions of learners last school year and that should not happen again,” said Raymond Basilio, ACT secretary-general.

The DepEd vowed to pay for the overtime work during a June 24 dialogue but according to the ACT NCR (National Capital Region) Union, the teachers have yet to receive the promised payment.

Another case of ‘thank you’

“Will it be another case of ‘thank you’? Is it always going to be like that? … DepEd, you should be ashamed [for] it is [us] who literally shouldered your so-called learning continuity plan,” Vladimir Quetua, ACT NCR Union president, said in a statement on Friday.

The group also condemned the newly issued DepEd Memorandum No. 056 that indicated the guidelines for computing the proportional vacation pay for public school teachers for school year 2020 to 2021.

“[The] DepEd should just scrap out that multiplier factor and totally refrain from deducting teachers’ salaries at least for this fiscal year, especially that they still have an outstanding debt to teachers i.e. the unpaid overtime pay,” Quetua said. INQ

Don’t miss out on the latest news and information.