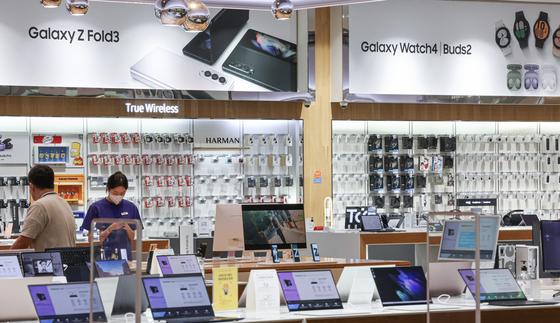 A Samsung Electronic store in Seocho-dong, Seoul, on Friday. Samsung Electronics is most likely to be one of the Korean companies that will face additional taxes under the OECD-led global digital tax, which will be applied from 2023.

With 136 countries and territories finalizing an agreement on a global tax designed to capture profits shifted to low-tax jurisdictions by tech companies, the focus in Korea is on how the pact might affect some of its largest companies, namely Samsung Electronics and SK hynix.

The Organization for Economic Cooperation and Development (OECD) on Friday announced that 136 jurisdictions, including Korea, have agreed to a “landmark deal” that would levy a 15 percent tax on “multinational enterprises” starting 2023.

The companies that will be subject to the global tax will be those with annual revenues exceeding 750 million euros ($866 million).

Under the pact, companies with more than 20 billion euros of revenue will have to pay taxes in countries where the revenue has been earned. The bar will be lowered to 10 billion euros in 2030.

An estimated $150 billion of additional global taxes will be collected annually, the OECD says.

Samsung Electronics is expected to be among the companies hit by the program.

In 2020, Samsung Electronics booked 237 trillion won ($198 billion) in revenue. SK Hynix reported revenue of 31.9 trillion won that year and is likely to be above key triggers for it to be subject to the agreement.

The Korean companies had no comment, other than to say they were monitoring the situation.

Finance Minister Hong Nam-ki on Wednesday at the National Assembly said that there will be more pluses than minuses for Korea once the digital taxation goes into effect.

“While our companies will pay more taxes in countries in which they do business, once the digital tax goes into effect, we will have a foundation for taxing multinational companies that are operating in Korea,” Hong said. “The taxation will be much larger than the taxes that our companies will be paying” in other countries.

The Finance Ministry said it will also look into measures to lessen the impact of the program on Korean companies, especially in terms of preventing double taxation.